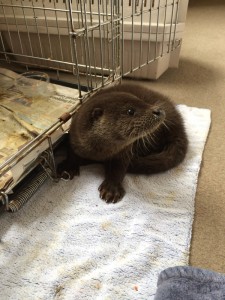 Mull Otter Group were called out to rescue a very poorly otter cub at Gribun, Mull on 23rd March. Things did not look good for this little cub, and it was by no means certain that it would survive the night. But, after being rehydrated, and receiving some special care and attention from Jane Stevens, our Chair, it soon perked up.

The otter cub was named Gribun, after the place where he (or she) was found, and soon started to feed well, and become more active.

By the 26th March the cub was well enough to travel to the mainland where he will be cared for by the SSPCA. There, they have another cub to keep him company. He will have as little human contact as possible, and will be released when he is about 14 to 15 months old, by which time he should be old enough to survive on his own.